Chit Chat – A FB Messenger That Gives a Glimpse of things to come?

Every so often there is a new program that comes out that revolutionizes the way we connect online. Depending on your generation, you will have remembered IRC when that was first birthed, and interestingly enough, it is still around. Then you may remember ICQ and MSN, both of which showed up around the same time.  Then there was the MySpace boom. This was a huge success in what was to become known as social networking, but as quickly as it came in, out the door it went. Then came along Facebook, and for the last few years it has been front and center of the social media scene. Though with Facebook’s benefits come a few disadvantages as well. To be able to chat with people, you would need to have a Facebook session open and be on that page, making it difficult to do anything else. You could open another browser but that is just a different window that offers a small chat screen.  Or you could use the option to pop out the chat session from Facebook, but then you still have to have the Facebook session running in the back ground. What if you could have a chat with your friends on Facebook, without having to have Facebook open?

This is where Chit Chat comes in handy. I have been using Chit Chat continually for almost 12 hours, talking to family, friends, and clients, all without having Facebook open or without any issues at all. I have to say that I am thoroughly impressed with the simplicity and ease of use that the program offers. It works the way you would expect, it logs into the chat portion of Facebook and allows you to chat with everyone that is online on your friends list. 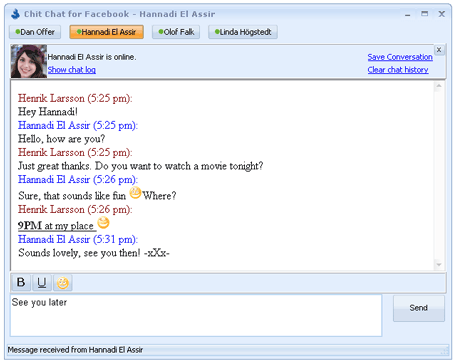 Along with being easy to use there are a few nice touches that are an added bonus to this program. For one you can post a status directly to your wall, which will be updated to your Facebook page in seconds, allowing you to tell the entire world, or at the very least your friends list, what is going on in your life without having to log in again to the site.

You can also send the people on your friends list a Facebook message that they will see as a regular private message on Facebook. This is nice to be able to do when they are not online and you need to say remind them of the practice session for the band, or whatever else is important that you need to say to them.

Have a comment to make to someone that you want everyone to hear, you can also post directly to their wall though Chit Chat, although you cannot see the replies as of yet, it could be an update for the future.

Along with these features are an abundance of preferences that you can set to help make using Chit Chat easier and more enjoyable. You can turn off and on different alerts, such as when people sign in and out, (I suggest doing so- as people log in and out so often it can be annoying to have it consistently popping up.

You can sort your friends and family into groups, for easy management of seeing who is online at any given time. This is very helpful when you have quite a bit of people on your list and not all of them are close friends.

Are you the music guru of your group? Want to let everyone know what tune is going though your head and speakers at any given moment, well Chit Chat will automatically update your status to what you are currently listening to.

Overall this FB Messenger has some huge potential to change the way we use Facebook and interact over this social media giant. This program is still in its infancy stage in terms of release and following but it is growing quickly and is definitely one to watch over the next little while. Rating wise here are the numbers out of 10. 1 being horrible and 10 being amazing.

So there you have it. Chit Chat, the next revolution in communication.

Half the Time Spent on Social Marketing is Wasted