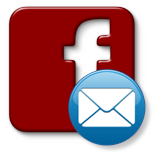 During a press conference yesterday Mark Zuckerberg showed their new message system. Earlier Facebook could only handle internal messages between the users.

According to Zuckerberg the new message service will not compete with existing email services, but to be a complement to Facebook.

“We don’t think that a modern messaging system will be e-mail,” Zuckerberg said.
A small group will get access to begin with and the rest of Facebook users will get access the coming months.
Until next time 😉
Peter – Your Social Media Guide