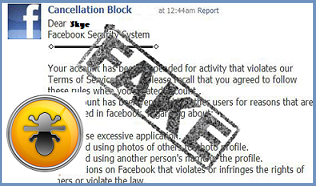 Facebook users got a heads up Tuesday against a new malware disguised as an email. This latest scam uses the network’s platform to try to trick users, asking them to confirm if they want to cancel their accounts.

According to Sophos, a computer security firm, It provides a link to “confirm or cancel” the supposed request, but the link leads to a third-party app running on Facebook’s platform.

Sophos warned, “Of course, that means that the link *does* go to a facebook.com address – something might fool those who are not cautious”.

“And it seems they’re pretty insistent that you allow it.. If you hit the ‘No thanks’ button they’ll just carry on pestering you to allow the Java applet to run,” said Sophos, which also acknowledged that the social engineering being used by the tricksters behind this malware attack is “pretty cunning.”

Internet Heaven or Hell: What Is Next After Passing?