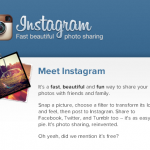 Today’s latest on social media is about couples signing up a prenuptial agreement about social  media use, wherein they cannot post nude or anything that would embarrass or harm the reputation of his other half. Usually, the penalty will involve money that some of the well-to-do New York couples are paying up to $50,000. Although some couples would just have a conversation about their privacy agreement, some of them think that having a written agreement will help them avoid any problems in the future. To check out the full version of this story, go to the source.

A Million Downloads: Is A Selfie App Shot for Real?

Being Responsible on Social Media